That Which is First #Filofax 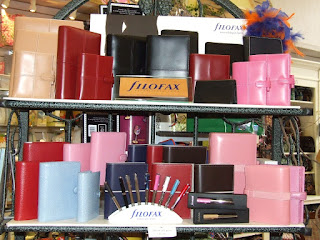 It all began innocently enough.  I watched some youtube videos on planners (Mostly Filofaxes) and getting organized and then I had to own one. Then two, then three, then four, then five, six, seven, ahhhhhhhhhhh!

To be honest, I am using all of them for some facet of my life.  They each have a purpose.  So since I've made this committment to the Filofax planner I intend to record my experiences here on this blog.

I used to use planners all the time.  Although, I've never owned a FiloFax until June of 2012.  Just simple store bought ones, I remember picking a really pretty red one up at Target once.  I loved using them.  I put everything in them.  They were a solid, dependable resource that was always with me.  It was like a "mini me" that never forgot or lost anything.

One day my dbil (dear brother in law) gave me a used pocket pc which actually stole my affections from the hand written planner.  I used it religiously for about a year when one day it just wouldn't turn on.  That was it!  Everything I stored in there was gone!  It was like a death in the family for me.

The solution, in my mind, was to purchase a new one.  I said to myself , "That would never happen to a new one".  So I did, a new one was purchased and used for about another year or so and then one day, guess what it wouldn't do?  That's right!  It would'nt friggin turn on!  Sooooooo, I gave up.  White flag flying.  I burned both of them in a funeral pyre in my backyard.  It was a very solemn occasion.

At that point, I neither turned to technology or the hand written calendar.  I did neither and for a very long time I floundered in forgetfulness and chaos.  Until, that is, my organizing everything phase kicked in.

I organized every closet, drawer and cupboard in my house.  I developed "systems" for everything.  I was tired of looking for things, tired of piles, tired of confusion.  So, since I'm a visual learner, YouTube was where I turned.  I found wonderful videos on organizing everything, which also led me to the Filofax world.  I say world because I found a world all unto itself for FiloFaxers.  (noun, meaning someone who loves, uses and is devoted to using a Filofax(es)).

I've found that I'm very happy in this little world.  I feel I'm back to my old organized planner self again.   But, in a better more sophisticated way.  This blog is dedicated to that journey.
Posted by Mary at 2:48 PM 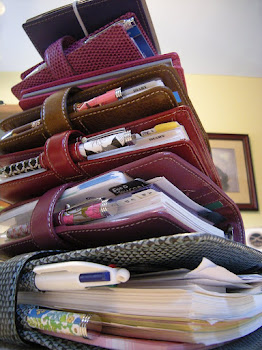 Mary
Just me being me!